Reggae artiste Malayky - Malayky (read: Malla –yee–Ki = like the “key”), the pearl of the Reggae, since February 05, 2017, has just been propelled on the top step of the podium of African Reggae, thanks to his first opus “Radykal Roots”. 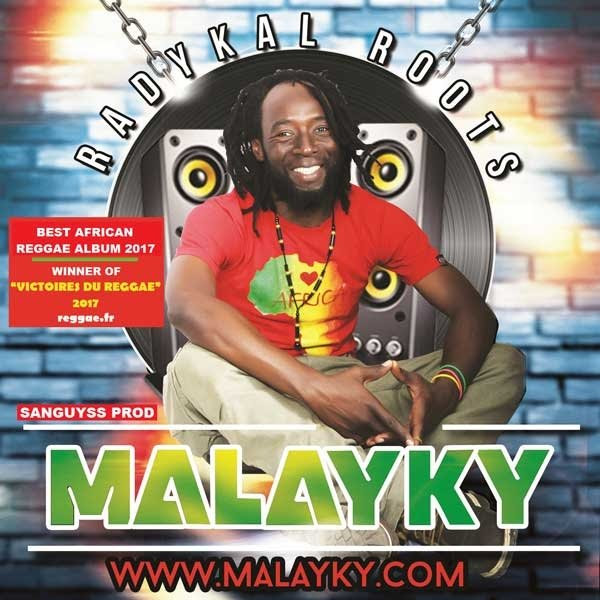 His album “Radykal Roots” is crowned “Best African Reggae Album 2017” by Reggae.fr in a contest named “LES VICTOIRES DU REGGAE”.
This distinction is an honor to Côte d’Ivoire, which has already seen Tiken Jah Fakoly and Alpha Blondy winning that throne.

Surprising as it might seem, the 3 of them have in common the same rich cultural background attached to the Bambara also called Mandingo.

Mamadou Soumahoro nicknamed "Malayky" was born in to the Mandingo Tribe originating from Odienné in the northwest of Ivory Coast (Côte d'Ivoire).

In 1993, Malayky met Tiken Jah Fakoly who was also beginning his musical career at a concert during the peace caravan in Danané. This was the beginning of a deep friendship that comforted Malayky in his decision to devote himself only to music.

With all of Malayky's accumulated experience and especially his main asset that is his fabulous voice, Tiken Jah helped him enter the studio to record his first album in 2000. But, given the socio-political problems that Ivory Coast (Côte d'Ivoire) was facing at that time, the album was never completed. Malayky has spent his time since then touring and singing back-up vocals for Tiken Jah Fakoly.

Like the Reggae world stars such as Bob Marley, Alpha Blondy, Lucky Dube and Tiken Jah Fakoly, Malayky focuses on conveying a strong message through his music. His songs depicting the scenes of everyday life and his sensitivity to the youth issues of the Ghetto has made him the voice of the voiceless. Malayky also sings the cause of the Africans, their troubles, their questions, their hopes and revolts.

By a heap of hard work, perseverance, and courage, Malayky has released his 12-track album "Radykal Roots" that is the result of over 20 years in the making. The album reveals his huge vocal qualities and the musical arrangements performed by Manjul at his “Humble Ark” Recording studio in Bamako (Mali) with the participation of Moses Doumbia in Abidjan and Georges Kouakou for the musical arrangements at Lion and Fox Studio which raises the standard of this album and is also where it was mastere.

The adventure that began 20 years ago, looks glorious to the delight of all music lovers, in Africa and the world.

I Hear His Whisper  Purchase on CdBaby.