Born in Belgium Tina Sureda Castello, also known as Onesty is a multitalented artist. At the age of six Onesty started to sing in the Antwerp cathedral choir, this experience was the base of her musical evolution. 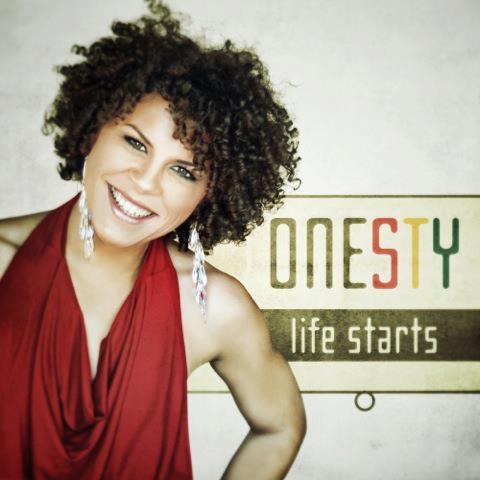 Born in Belgium Tina Sureda Castello, also known as Onesty is a multitalented artist. At the age of six Onesty started to sing in the Antwerp cathedral choir, this experience was the base of her musical evolution.

The Sureda family, a spring of vocal talent, surrounded her with music, singing and concerts; she would always follow them around and imitate them when nobody was watching her. Onesty already knew at a tender age, that her main goal was, BECOMING A SINGER. She showed natural songwriting during her early years, as she was only 8 years old when she wrote two completed songs.

As a young teenager Onesty developed a great love for urban music, Reggae, Soul, Hip Hop, R&B etc... At that time she also joined an urban collective group of dancers: They were called Jobo's streetwise dancers. They travelled all over Europe, doing different kind of stages. Still a choreographer and occasional dance teacher,  her singing and rapping skills has  always been her main focus which has allowed her to be involved with projects, bands and great performances.

In 2006 Onesty stepped up to her calling, her unique sound, with that warm and soulful presence, meant that there was always going to be a place for her as a female European artist to look out for. Her songs are a mixture of reggae, soul, R&B with all the special touch you could only find in her music. Onesty has performed live with Ashamband, a young upcoming Belgian reggae band.

Since 2007 she has come together with her own musicians and has been touring Belgium, with additional shows in other parts of Europe to a well received audience and promoters who have welcomed her new fresh sound. Onesty has had the pleasure of opening on concerts for international artist such as Max Romeo, Earl 16, Pressure, Blackmann, Red Rat, Tikenja Fakoly and many othjer Belgian bands with international fame like Leki .. The promo Cd "Take Your Time" is produced by Onesty and shows you the beginning of a rich musical evolution.

In 2008 Onesty stepped down on Jamaican soil to feel and join the original reggae force. The young singer is fortunate to work with guitarist producer, Rohan Gordon aka Maka Lox on the Selassie God label. Onesty recorded tracks with Maka Lox at Tuff Gong in Kingston with Horsemouth, the legendary drummer from "Rockers" time. The first song finished was "Is This Love" on a fresh Jamaican Riddim, the song got airplay on Irie FM the number 1 reggae radio station in Jamaica & worldwide.

Onesty has a real immersion in the roots and vibe of Reggae Music. She could work with and draw inspiration from artists such as Earl China Smith, Anthony B, Duane Stephenson, Bobby Digital etc.

She has had an eventful journey so far which had been the source of inspiration for a series of new songs which we can expect in 2013.

She has now joined forces with Ajang Music Productions, who are responsible for her career directions and productions. Onesty will be releasing songs into her album which will be due sometime in 2013.

The first single being "Life Starts" being released  by Digital Label Zojak Worldwide and can be found on  I Tunes as of 7th January 2013.

Recording ariste Onesty En Route To Success Not rated yet
It’s with total amazement and satisfaction that team Onesty watches her transform and slowly take over her own arena in the music industry. When Tamoy …

Not Good Enough Says Reggae Singer Onesty Not rated yet
Its new and it’s as entertaining as her rest of songs, Tina Sureda Castello better known as Onesty under her Ajang management releases new song NOT GOOD …

Onesty - Belgium Reggae princess is in Jamaica Not rated yet
The photo above is that of Belgium nationality Onesty, artiste under the international production Ajang Music their head office is located in Kingston, …

Ajang Music Production: ONESTY - WHAT LOVE S VIDEO Not rated yet
Some time ago we sent you the mp3 for this wonderful new single and told you to look out for the video. Wait no more as we give you Onesty's WHAT LOVE …