No-Maddz Heaven On Earth album coming in 2018 - Heaven on Earth, the second album from reggae-dub act No-Maddz, is slated for release this year. It is co-produced by them and Major Laser's Walshy Fire. 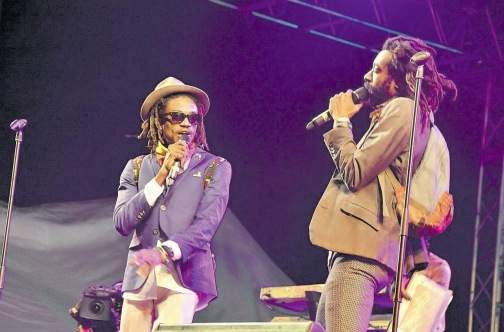 “We are tackling issues that are easily ignored because everyone tends to speak about popular issues, that easily get a faster reaction,” Creary told the Jamaica Observer. “But Heaven on Earth goes into the lack of using the mind properly, that's an issue we're ignoring and 20 years from now it's going to have effects we can't undo. Poetry explores the ailments of society and police oppression. We want to comment on popular culture without losing our originality. It's been more than three decades of terribly violent music that doesn't really teach the youths anything,” he continued.

Creary also revealed that a short film will accompany the album.

Their debut album, Sly and Robbie Presents The No-Maddz (2015), featured tracks like Romance and Shotta. Other projects include The Trod and Sort Out Yuh Life (2011).

“At the time when we started, everyone wanted to be a deejay; dub poetry was dying,” he said. “We always saw ourselves just as good as Beenie Man, Bounty Killer, Spragga Benz, even dub poets like Mikey Smith.

If you strip the music, Bob Marley was a lyrical dub poet, Miss Lou was as well, and we consider ourselves to be of that school. Fans view us as this best-kept secret and want everyone to know about us. Even the new generation hear the sound but don't know we are the ones behind it.”

No-Maddz are scheduled to perform at Sierra Nevada World Music Festival in California on June 24. It will be their third performance at the 25-year-old roots festival which runs from June 22 to 24.