Mistaken Identiti - The debut album from Peppery - Released from the confines of a Salt 'n' pepper shaker crafted in Manchester by a Jamaican potter comes the fiery sound of Peppery on his "debut" album, "Mistaken Identiti".

Originally conceptualised by Mexican and overseen by Fitzroy ?Heavy? Nish of Phattrock Entertainment, the 16 track set was launched at the Power House in Manchester, UK, on the 19th of August 2011 at an event, which also marked the launch of Sickle Cell Care Manchester.

Born Clayton Brown in Trelawny, Jamaica, Peppery first started his career as Bongo Chilli releasing the album, ?Real Musician? on Sativa Records in 2007. Shows around England and the rest of Europe followed with an assortment of collaborators including his mentor, Daddy Freddy as well as Celt Islam, Kush Arora and others.

With contributions from Daddy Freddy and Ras Tweed, ?Mistaken Identiti? is a mixture of Dancehall, traditional Roots Reggae and 'Alternative' music with the backing tracks incorporating both live instrumentation and digital programming. 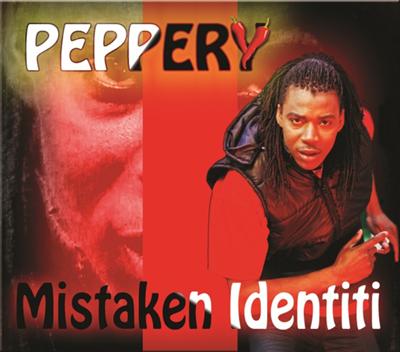 Previously released tracks that have already received favourable airplay include ?The Score? and ?Clap Your Hands?. Come 2011 and his catchphrase ?Peppery? has now become Bongo?s second name prompting a change to the entity Peppery aka Bongo Chilli. So Peppery?s debut is actually Clayton?s second album ?

confused? Don?t be, just savour the Peppery flavours when you press play.

The album?s title track may be deemed controversial by some as the subject is the pain caused to the family and friends of loved ones who have lost their lives violently. ?Let it be known for the record that I am in no way encouraging anyone to take the law into their own hands & seek revenge? says Peppery asserting, ?I am merely highlighting the fact that many people have been killed innocently.?

Producers on the project include the aforementioned Mexican of Gone Music, Ganzi of Classiqueinc, Damalistik of Roots Survival Records, Rob of Big Belly Records and DJ Afghan of Soulove Records.

The album has been launched in the UK as a limited edition CD on Peppery?s own record label Bongo Chilli Records but the rest of the world will have to wait a little longer before it will eventually surface in their local outlets. On the other hand, those who shop online are now able to purchase the CD directly from the source. Join the Facebook group ?Peppery? to find out how or send your queries to clayton.bongochilli@gmail.com.

You can also listen to some of the tracks from the album here: www.reverbnation.com/peppery