The police, in a post on Twitter a short while ago, said that they believe the artiste, whose given name is David Brooks, can assist them with an ongoing investigation. 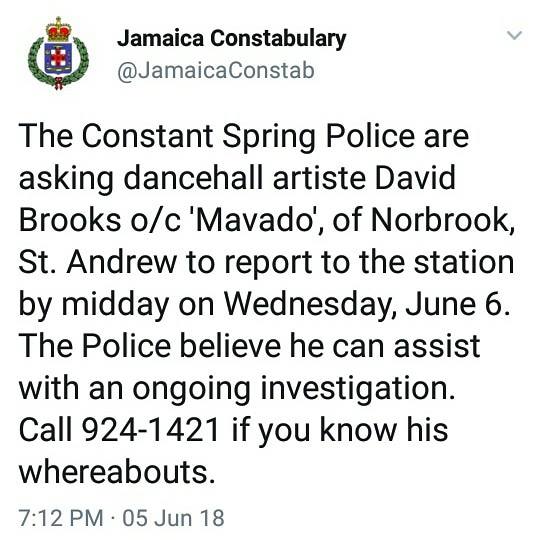 It was alleged that earlier today police took five people into custody, including that of the entertainer's brother.

However, a member of the Corporate Communications Unit (CCU), the media arm of the Jamaica Constabulary Force, when contacted by OBSERVER ONLINE said that the claim was not true.

The policewoman, who did not give her name, also said the investigation for which the entertainer is being sought, is not related to this morning's murder of Lorenza Thomas in Cassava Piece, Kingston.

The 23-year-old was reportedly shot and chopped multiple times then his body set ablaze after unknown assailants kicked open the door to his home about 3:30 am.

The incident comes after reports that Mavado was shot at in the area over the weekend after he and an individual had an argument.

The person left the scene and returned with a group of men, one of whom fired at the entertainer who escaped.

The matter was said to be reported to the Constant Spring Police Station where an individual is being held in connection with the shooting.