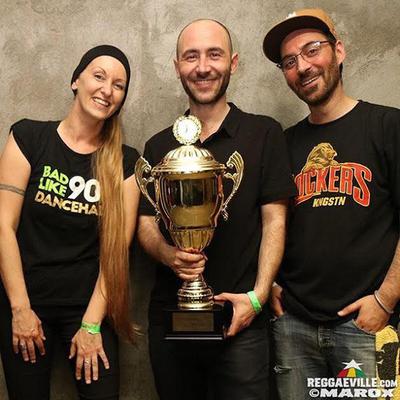 With the Euro Rumble title up for grabs and a prized chance to compete at World Clash, which ultimately affords the winning sound international visibility and slot on the famous Welcome to Jamrock Reggae Cruise sound clash, the passionate and competitive essence of the clash wasn’t a surprise! As fate has it, Italy's Northern Lights nabbed the Euro Rumble title, following what could only be described as an intense night-long battle with the sounds hailing from all over Europe.

The energized crowd, which offered unlimited cheers and raving along with fair voting, served as the ultimate motivator for both the sounds and promoter alike. The overall energy, which was bursting at the U-Club's seams, easily makes Euro Rumble one of the most electrifying clashes of the Rumble Series. While the entire line up possessed dynamic skill sets, it was Northern Lights and Splendid in the entertaining final stretch, because of the respective eliminations of Biomassa, Safari, Irie Crew and Warrior, most surprisingly.

"We made it! From Udine county side in North East Italy to the World Clash," says Northern Lights sound. "What a feeling it is now, after 18 years of struggle. We are so proud that we managed to maintain the love for sound clash no matter the obstacles we met!"

Clashing since 1999, Northern Lights sound consists of Michelle, Fyah Ed and Dj Deso. Solidifying their position on the European sound clash scene via several respected clashes during 2016-2017, the Italian war sound was in prime sound clash form. The sound cites performance and strategies for their winning advantage, declaring, "We are sound clash fanatics first, so we like to understand all the tactics in sound clashes that could lead us to be victorious."

As Euro Rumble concludes the first Rumble Series season, promoters Irish and Chin couldn't be happier that this accomplishment falls during the midst of their 20th Anniversary celebrations. Much to their credit, the Rumble Series saw clashes across 5 territories. With the Euro Rumble audio already garnering thousands of plays and an incredible buzz and influx of feedback, there is no doubt that next year's Euro Rumble will be even bigger and better.