Hempress Sativa is a multi-faceted young talent, propelling Jamaican Muzik into the future maintaining a strong foundation that makes her Muzik timeless. 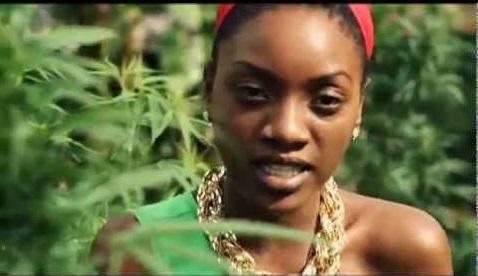 “My Muzik is peculiar and I don’t anticipate Everyone to like My Muzik … for I MuzIk deviates from What is standard, normal, or expected." - Hempress Sativa

Her expressive writing skills and sharpened delivery commands the attention and respect of her audience with each performance. She has an uncanny ability to keep all listening, as if in a trance, as they absorb her every word, every rhyme. This is the prologue to the most versatile female of the Roots Generation Hempress Sativa.

‘Yes I’ve been rocking to this beat; from mi mami belly, Ilawi selecting the records ​Dj a Brigadier Jerry, from flash’it in a JahLove dance A gallop like a donkey”

Ode to the first encounter with an intangible embrace the verse speaks to her early exposure to Muzik. When her father would summoned almost 4 years old Sativa and her older siblings to the control tower, which was located in one of two bedrooms in the board house, while he was preparing his selection for the next coming dance; he would always include his family. Known for his vast collection of Orthodox selections. He would skillfully place the needle on the turntable, playing a version, and confidently handing the Mic to the offspring who dared to go first. It was there at home she would succumb to her first love and began to hone the skills that would manifest in her extraordinary talent.

Hempress Sativa, who’s first performance was at the age of 13, a Twelve Tribe of Israel Showcase at once King Bebo Lawn featured artists of great magnitude but the act that resonated most with the elder Ras Tafari crowd was the rhapsodic melody of a voice unfamiliar and unfit for body from which it belted from as she sang “Tyrone” a cover by rhythm and blues/ roots artiste Erykah Badu. Background vocals compliment of her sister's group Tajai. She brought patrons to applause requesting an encore from the petite frame.

Her moral fiber is strongly governed and deeply rooted in her Rastafari livity she sees herself as an Instrument of H.I.M Haile Selassie I First; and maintains that marijuana as an important part of the social fiber of Hempress Sativa’s culture. This is conveyed in the contents of her songs. Such as Get High....

“Everytime I get high; Babylon falls every time I get high; Every time I get high, Babylon has fallen”  Twisted Sheets and “OH La La Laa ” a espouse of an Hip Hop anthem advocating for the decriminalization of Marijuana, an issue that touches the heart and consciousness of Hempress Sativa with the incarceration of people worldwide. It has inspired her mission to educate people about the healthy use marijuana, its medical purposes and products given her global platform on which she speaks.

Her Muzik although generally traditional of the Roots Rock Reggae genre at times crosses boundaries and may reflect traces of Rhythm and Blues as in the sultry serenade of “Kushite Love”. Exemplifying her agility as a melodic singer amidst exposing a softer side to the artiste.

With the release of The Unconquerebel produced by Conquering Lion Records; Hempress Sativa's debut Independent 13 track LP. This Album represents An Energy that has existed since Creation! A Energy that transcends Time and Space! A Frequency that raises the Vibrations of the Female Inner Chi, who in this time Will Rid the Land Of Evil!!! The Eye Of Ra, The Powerul One, The Warrior Goddess, The Goddess of Fire and War, The Protector Goddess, The Fiercest One, The One before whom Evil trembles, The Nyahbinghi Queen, The UNCONQUEREBEL Lioness Sekhmet, The revengeful one of The Benevolent aspect of Hathor!!! She is the Balance between Gender in the Female beings and has manifested herself throughout History in the form of Queen Makeda, Queen Nzinga, Queen Yaa Asantewaa, Queen Amina, Empress Taitu to name a few... In this Iwah Hempress Sativa who's been Know to advocate against injustice as depicted in the Track No.5 Fight for your rights an Ode to struggles of the people of African descent in which she chants:

2017 The Queen Cannabis made her first appearance in Europe spanning throughout Belgium, France, Spain and England. With an impressive set at Reggaegeel expertly backed by her band Unconquerebels. At Rototom Hempress dominated the stage with an noteworthy rendering performance. Back in the US; Minneapolis was uncharted territory to be conquered by the Queen Cannabis as she would make a rare appearance with The Scientist sponsored by Redbull Sound Select. Introducing her sound to a sold-out venue receiving great reviews. Sativa has been a popular name on the Jamaican scene for years performing at Rebel Salute, Sumfest and Digicel’s “Bob Marley” sponsored events. Hempress is slated to embark on a US tour starting January to February and Europe in March to April.

Hempress Sativa is a multi faceted young talent, propelling Jamaican Muzik into the future maintaining a strong foundation that makes her Muzik timeless.

“Muzik is the soundtrack to life” - Hempress Sativa