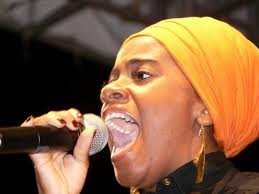 Etana first had a taste of Billboard glory in 2014 with her album I Rise. It also got to number one.

Speaking with THE WEEKEND STAR, Etana said that she had no expectations for the compilation, as she only wanted people to buy it.

Now that she has achieved this bit of history, the singer is grateful.

"I am happy that I am able to achieve such an accomplishment. I have come a far way, sometimes on love for the music and faith alone. It's not an easy time in music, but whoever said anything should or has to be easy," she said.

In an interview with THE WEEKEND STAR before her second album charted on Billboard, the singer expressed how difficult it has been for women in the industry. She explained that there are a lot of talented women, particularly in reggae, who do not get the recognition or support they deserve.

"Honesty is not always the best policy, but if I may," Etana said at the time. "When I was told I was the first female in 15 years to have a Reggae Billboard number one, I was not happy about it. I was appreciative of the support, but it puzzled me because I really respect the work of Tanya Stephens, Lady Saw, Lady G, you name it. It's rough as a woman in music in general, but even more rough in reggae. The men are most times seen as first and top priority by everyone, and the ladies second or last or none at all."

Not much has changed since Etana made that statement. Although grateful for her achievements, the artiste still believes there are still too many talented women in reggae for this bit of history not to have been made sooner.

Having expressed this, Etana said that she hopes the industry will one day treat women as equal beings. She stressed that there is more than enough female talent on the entertainment scene to ensure history-making moments more often.