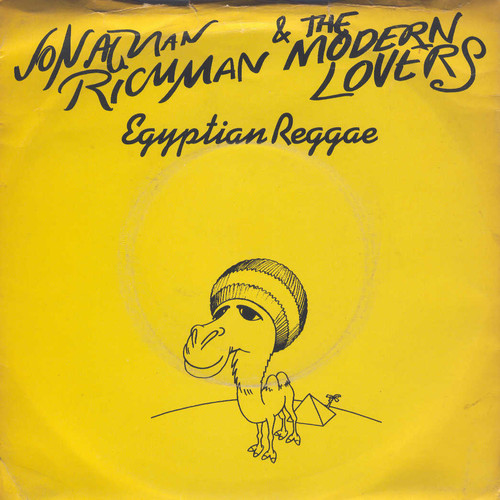 What is Egyptian Reggae? The first thing which might jump out in your thoughts are probably, Reggae music coming from Egypt, right?

Guess what?,  you are wrong, Egyptian Reggae is a great piece of instrumental work done by Jonathan Richman & The Modern Lovers Band from the United States of America produced by Beserkley and distributed by Warner Bros. Music.

Jonathan Michael Richman (born May 16, 1951) is an American singer, songwriter and guitarist. In 1970 he founded the Modern Lovers, an influential proto-punk band.

Although the title has the word Reggae, the song falls under the Rock and Reggae music Genre.

Released in 1977, Eqyptian Reggae is track 10 on the Rock 'n' Roll with the Modern Lovers album.

Rock 'n' Roll with the Modern Lovers is an album by Jonathan Richman and the Modern Lovers, released by the Beserkley Records label in August 1977. It reached #50 on the UK Album Chart in that month.

The full tracklisting Including Egyptian Reggae:

Although Egyptian Reggae was originally recorded in 1977 which was three minutes and fifty seconds long.

The track was re-recorded in 1996 and used as a soundtrack in the movie "Baby Driver" the was a shorter version, which was two minutes and thirty-seven seconds long.

The writing credit was originally given to Richman, but this was later reissues of the track was credited to Earl Zero.

The Band Members who played this treasured masterpiece "Egyptian Reggae" are:

The single which was released in 1977 is only available on 7" Vinyl presently. Egyptian Reggae is now a collector which can attract a cost from anywhere between 1.07 - Pounds.

Don't forget about our very helpful and informative forum. Our questions and answers  fourm produce a wealth of information about dancehall and Reggae music. Click here to join in on the fun

Return to Reggae music and its Origins from Eqyptian Reggae page