Jamaica-star.com - Sizzla Kalonji has released over 70 albums throughout his career. One would think that the entertainer has done it all, and has no more surprises to come as far as compilations go. 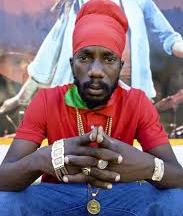 But the artiste, given name Miguel Collins, released his first ever acoustic compilation this month. The album, Sizzla Acoustic Sounds, was produced by the entertainer on his Kalonji Records label.

Kalonji told THE STAR that he has been reflecting on the state of the industry lately and believes the music could do with some natural sounds, sounds he plans to deliver with his latest project.

"I've been doing a lot of interviews and shows and at these events. Media personnel and other persons have been asking about the music and its present situation saying elders are not making their voices being heard about the natural sounds of music," he explained. "I said: 'You know I'm going to create an acoustic album'.

He said the album will show off the "natural sounds of music, sounds people not paying much attention to anymore".

Kalonji, who celebrated his birthday yesterday, explained that there is something special about music put together from scratch with actual instruments, and he's hoping the album will encourage not just musicians but also young people to want to learn how to play an instrument.

"It's just another level that I'm helping to prepare the younger generation to reach in the music. There's something so much more special about the drummer sitting around the drum set in his element, making sweet sounds. That is what people will experience from this album," he said.

Despite wanting to encourage young professionals and aspiring musicians to be less dependent on computer generated rhythms, Kalonji says he admires the work coming from today's generation of reggae artistes.

"There are a lot of beautiful songs out there being produced and sung by a lot of young professionals. We encourage the youths. Most times, the problem is with the lyrical content, sometimes it deters the kids from the path of righteousness, but other than that, nothing is wrong with the music," he expressed.

Kalonji said he liked the vibes coming from the young people and wanted to see that the music brought them joy.

"So I have no problem with what they're doing as long as they keep it positive and listen to the advice of the people and try to fix things that need to fix," he said. "The kids nowadays, they see a lot of great things being done and they want to be in that conversation also and they are doing their best."