It is base in Kingston, Jamaica.  It is also Known as one of the greatest modern sound system.

The sound was formed after Jason Henriquez, Shaw and Matthew Gray formerly of sage enterprise came together and played at a house party and Barbeque.

After 17 years in the business the sound now has ten members on its team, they are Jay Z, Shaun, Matthew, Sanjay, Ash, Cutty, Marc, Donny, Hustler and Smallvoice.

They are available for your parties, corporate functions, Dancehall sessions, clubs and weddings.

Despite having been dubbed an ?uptown sound? Coppershot has proven they have the ingenuity and the right flavor for all crowds.

In February 2006 they formed the Copper shot record label which is also known as Coppershot Music.

They has undertaken the music production on a serious level and looks to release lots of new productions.

Coppershot Music is where all the leading entertainers flock to do work and to borrow some of the Copper shot vibes.

In 2011, at the Youth View Awards, the sound was voted to be the best sound system for the year 2010. This was their second award as they also won the award for 2009. 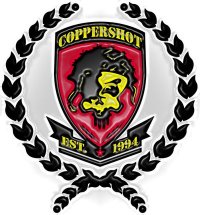 The sound has also become a crowd favorite, having patrons dancing to the hardcore juggling on the wheels of steel. Their style consists of distinguished remixes, entertaining dubs, unique mixing, scratching and original jams of roots reggae, pop, soca, dancehall, hip hop, reggaeton and R&B.

With such an arsenal its no surprise that their mix cds have become world renowned. The “Welcome to Jamrock” culture mix was sought out all over the world and the follow up series have proved to be just as popular. Their dancehall mixes have been seen at cassette vendors all over Jamaica, the United States, England Europe and Japan.

In December 2008 Coppershot created history by becoming the second ever Jamaican entertainer to perform in Qatar & Bahrain (the first Being Sean Paul) & the first ever dancehall sound to tour the States of the Middle East where they were met with much love & aside from world favorites Bob Marley & Sean Paul were able to introduce a lot of other Jamaican stars to the people & open up the doors for future sounds & artists to perform.

Dj small voice is representing for the ladies and I love his song lock the shop from the first time I heard it on zipfm and then on ragga shanti show.

I fell in love with is music, he's also a selector on coppershot sound system and he brings that same energy to his music....you should definitely do a feature on him and music.