Cherine Anderson - In our modern day parade of glamour, glitz and unmerited superstardom, Cherine has taken today’s road less traveled; the path of paying dues, cultivating her abilities and developing her signature Dancehall Soul sound; a mixture of dancehall, reggae, soul and r&b. 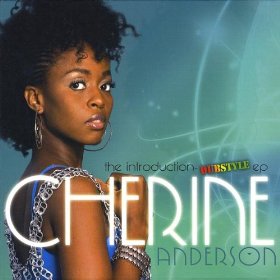 In only three short years, Cherine has become one of Jamaica’s leading young female singer/songwriters and performers. Her genre defying grooves coupled with her powerful voice and thought provoking lyrics have brought her in front of well over 1,000,000 live audience fans in the past 18 months. With a growing army of supporters, who she affectionately calls her “Dancehall-SOULdiers”, she has had the privilege of steadily touring in places such as Jamaica, Europe, Canada, Australia and the USA.

and multi-platinum selling rock band Counting Crows, just to name a few. She has also toured with Sly & Robbie and is endorsed by legendary duo. Grammy award winning drummer Sly Dunbar hails her as “...the real deal. A truly strong vocalist on hardcore riddims with the ability and potential to surpass reggae audiences to reach the masses.”

The east Kingston bred native is a constant and consistent positive representative of Jamaica; from penning and directing chart topping videos for her inspirational songs such as “Kingston State of Mind” and “Shine On Jamaica”, to stand out performances at the Inaugural Green Ball and Peace Ball during Barack Obama’s Presidential Inauguration, as well as the World Games Special Olympics, to reaching the Billboard charts. Cherine has made numerous appearances on television programs in Jamaica, Australia and the United States including The Late Late Show with Craig Ferguson and The Ellen DeGeneres Show and twice appeared on the award winning local show Profile with Ian Boyne.

Cherine Anderson is the first Jamaican female artist to hit the Billboard Rock Charts as she was featured on the song “Say Hey, I Love You” with Michael Franti & Spearhead. After almost 52 weeks the song is still on the iTunes charts and has been placed on the soundtrack of numerous films and TV commercials including the EA 2010 FIFA World Cup South Africa Music Soundtrack.

She dominated both local and international reggae charts with her smash hit single “Shine on Jamaica” from her critically acclaimed EP The Introduction-Dubstyle EP. “Shine On Jamaica” peaked at #1 for four weeks on both the NY Reggae Charts and South Florida reggae charts, and reached the top 10 charts in London.

The EP also produced reggae hits such as “Talk If Yuh Talking” and “Kingston State of Mind”. As a result, in early 2010 she was honored with the award for Best Female Vocalist of the Year at the Jamaica Excellence In Music Awards.

Cherine Anderson is in the final stages of completing her debut album, which is scheduled to be released in 2011. Not one for hype and extravagance, she has surrounded herself with a solid team who have guided her over the last few years and are ready to help her showcase her talents to the rest of the world. Cherine says, “Making music is like food to my soul. It’s powerful, it inspires me…I hope my music will inspire others to think, dance, laugh, but most importantly, to truly enjoy life.”

The Queen of Dancehall Soul, Cherine has released the hot and exciting music video for her latest single "Make up Sex". The video was directed by Kevin …

Cherine Anderson Gets South African Love Not rated yet
Johannesburg, SOUTH AFRICA 10/07/2015 Those were the words from the 5"3' Jamaican dancehall reggae soul singer as she and her band ignited youngsters from …

Cherine Set To Rock South Africa Not rated yet
Jamaican singer/songwriter Cherine Anderson takes her electrifying reggae dancehall-soul music to South Africa this month. The songstress will make her …

Cherine - Wah Dat Fah @cherinetv Not rated yet
Dancehall reggae music songstress Cherine Anderson have just drop a new single title 'Wah Dat Fah'. This track is some what different from the kind …

Reggae artiste Cherine has just launched a series call 'ASK CHERINE' : 'All this talk about sexy ' Not rated yet
Ask Cherine is a weekly series where Cherine answers questions from her fans and critics via her website and her facebook page Here is Episode #1 …

Cherine Anderson & Chuck Fenda "Call On Me" Not rated yet
Cherine and Chuck Fenda "The Living Fire" have done it again. They have teamed up to released what seems to be another sizzling hit single titled …