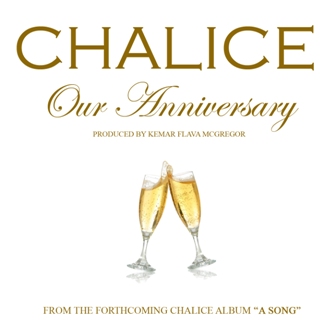 "Our Anniversary" is produced by Kemar Flava McGregor and written by Wayne Armond, Dean Stephens and Henry "Sadiki" Buckley, Jr. The song is the lead single from their forthcoming anniversary album "A Song" which is due in April of this year.

Already released as part of the Club Dance riddim compilation, "Our Anniversary" has benefited from heavy rotation at reggae stations worldwide. The song has entered the BBC World Reggae Beat Top 10 Chart in the UK. It is Chalice's first entry into any UK Chart in over 15 years.

"Our Anniversary" Single will be available on Chalice/Skinny Bwoy Jamaica worldwide on 2.14.12 in Digital format. Purchase through iTunes, Amazon.com and all other fine online retailers.

Return to Reggae Band Chalice from Our Anniversary single