Bluugo Magnum King Robbed at Gunpoint - The 2018 Magnum Kings and Queens of Dancehall competition winner, Bluugo, said he is grateful to be alive after he and a member of his team were robbed at gunpoint at his home in Linstead early Thursday morning.

Bluugo said the robbers made off with close to $100,000 cash, jewellery, clothing items and small appliances. 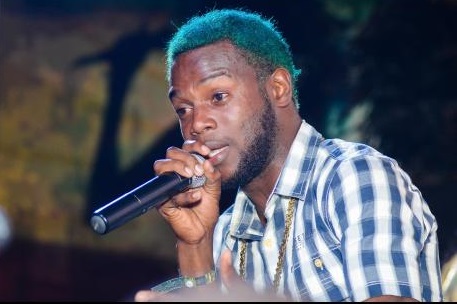 "Mi and one a me team member did up a listen some music, then we decide to call it a night and go bed. Some time after, me feel someone a grab and a pull me out a me bed, but me think a one a me chargie a ramp round with me. Mi end up get pull off the ground, and when me stand up, is a flashlight and a gun mi see a point inna mi face," he said.

A frightened Bluugo said he was then taken into the living room, where he was gagged, tied up, and placed beside his friend on the ground.

The entertainer said the robbers spend another two hours ransacking his home, stacking up on whatever valuables they could find.

"We kinda figure say is persons we know because a bare whisper dem a whisper so me can't recognise dem voice. Them all throw something over mi face so me couldn't really see dem. Them tie my hands so tight so till me finger get numb. Mi start make some likkle muffled noise, and dem take the stuffing out me mouth and ask mi a wah, and mi tell them me can't feel my hands and them free it up," he said.

Bluugo said he alerted his neighbour, who called the Linstead police. The entertainer, whose given name is Marlon Powell, provided THE STAR with a receipt from the Linstead Police Station that confirms that the incident was reported.

The singjay said he is still shaken up by the incident and has since relocated from his hometown.

"Somebody did already tell me say me need to give the place a break from me win Magnum because people may target me. Now me understand why people leave dem community when dem a try make it in a life. People always say dem ungrateful, but a nuh nothing like that," he said.

After nine years of trying, Bluugo was in May crowned Magnum King of Dancehall. He said that even in the run-up to earning that title, he suffered at the hands of thieves.

"Mi encounter a whole lot a obstacles during the nine years mi a try off a di music business. Mi all deh pon campaign and put down mi pan, and a the same people dem around me break it and take the money. This is another obstacle, but mi nah let it stop mi," he said.