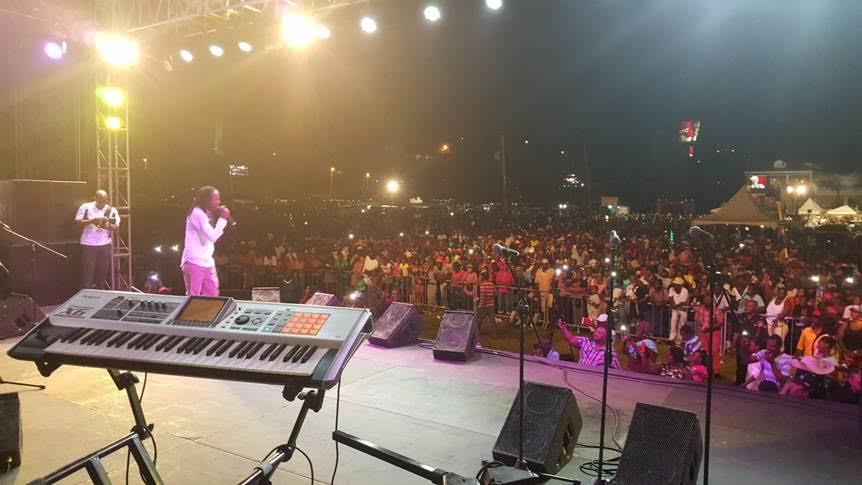 After giving a good account of himself at Singing Melody’s Birthday Party in Florida and days later a concert in Edmonton, Canada despite the frigid weather conditions currently affecting that space; Fans in Bimini and the Bahamian capital Nassau were not as lucky as torrential rains forced the cancellation of two concerts spearheaded by Reggae crooner Nesbeth.

The singer who was in the country for a three concert stint over the weekend got to thrill fans on the island of Abaco, however the shows in Bimini and Nassau had to be abandoned due to heavy downpour which flooded the outdoor venues. Though saddened by the situation Nesbeth says he will definitely be returning to the Bahamas at a later date to entertain the scores of fans who were anticipating his performance.

“Based on feedback my management has received there is a growing demand for my music in that space and it was very evident from the moment I landed in Nassau people began greeting me with much jubilation in anticipation of the concerts. However, everything happens for a reason so maybe the showers are just blessings for greater things to come. I also want to use the opportunity to apologize to those who decided to brave the weather and show up at the venue. But my Bahamian fans need not worry I will definitely return and give them a memorable performance in the near future.” – Nesbeth said in a statement to members of the Bahamian media.

Prior to departing the island the ‘D.I.A.L’ singer delivered another noteworthy set at the ‘Entertainers Against Crime and Violence’ concert held at Dump Up Beach in Montego, Bay. Attended by thousands included members of the political class, security forces and business community the event was aimed at injecting some positive influence in the volatile communities across St. James being plagued by civil unrest. Nesbeth says though he had another engagement on that day he had to lend his support to the cause.

“I am an advocate for peace so whenever the opportunity presents itself for me to instill some positive values to the people I will always try to make myself available, however unfortunately due to my hectic schedule that is not always feasible but I am very happy I was able to do so in Montego Bay” – Nesbeth added.

Meanwhile, back in the island for a few local assignments over the Yuletide season the Rastafarian singer is making final preparation to shoot the official video for his latest offering ‘Road To Glory’ featured on the Seanizzle Records produced 47th Floor Rhythm amid promoting the singles ‘Live Every Minute’ and ‘D.I.A.L’

Plans are also afoot for his upcoming European tour in early 2017.