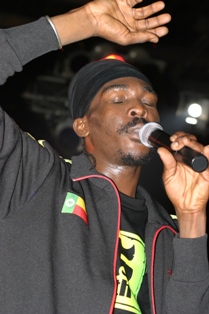 He grew up in a christian home and because of this when he decided to become a Rastafarian this did not go down well with his Mother and Grandmother.

He started out in the music business from an early age while he was still attending school.

Like most dancehall and reggae artiste he too started out deejaying on a local sound system. B started deejaying on Shaggy Hi-power.

After hanging around artiste such as Determine, Mega Banton and Terror Fabulos for a while, he then decided to made friend with Little Devon this led to his debut single "The Living Is Hard" which was released on the Wizard label in 1993.

Sucess did not came for him until when he team up with producer Richard "Bello" Bell. This led to some of his chart topping songs. Songs such as the controversial Fire Pon Rome, Raid Di Barn, Rumor and Repentance Time.

He released his debut album titled "Predator & Prey" in 1996 this was followed by "Real Revolutionary" the same year this album did very well in the US and United Kingdom.

He has since released over 24 studio albums and 21 compilations. His latest studio album "Rasta Love" was released in 2011.