A top charting album aiming for a Grammy nod, and a successful USA and European tour are the culminating hard work of reggae band Raging Fyah's fruitful 2016 year.

With the indubious honor of being regarded as one of Jamaica’s most promising young acts, the self contained band Raging Fyah has received acclaimed reviews from the Everlasting Tour which resulted in a myriad of sold out venues. Fans came out in droves to soak up the roots and reggae vibes, and sing along to songs from their deemed to be classic repertoire. 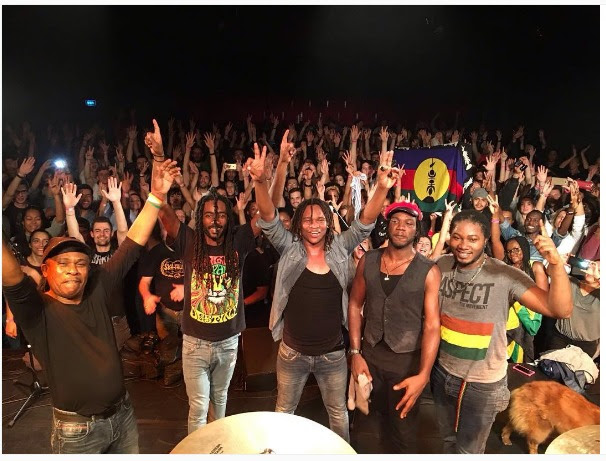 "London stood out to us. The first time we were booked to play Jazz Cafe the show was cancelled because low ticket sales. A few years later the show is sold out before date of performance." chimed the humbled band in unison

Word for word from France to Spain, patrons sang along to such tracks as "Dash Wata". The latter off their third studio album "Everlasting" recently delivered a video directed by Tricia Bent. According to the band, the song is "For all the man dem in expressing our thoughts to a beautiful woman."

Pele, Demar and Anthony Watson (drums, backing vocals), veteran guitarist Courtland “Gizmo” White and lead singer Kumar explained the vibe of the beautiful visuals filmed at the breathtaking Reggae Falls in St.Thomas, Jamaica "We wanted the video to reflect the song and not take away from the beauty of the woman and the mountain side... Let's go for a walk Down by the river side Let's go for ride.. Ill take you to the mountain side Baby give your hand.. I will take the lead talk... We can talk bout the birds and the trees I'd like to give you a squeeze..."

Raging Fyah will kick off 2017 by being apart of California, award-winning reggae group Tribal Seeds "Winter Roots Tour" which will see the bands perform coast to coast throughout the United States commencing in Santa Cruz, California on January 24th, 2017 and ending March 10th in Tucson, Arizona.

Speaking of the tour ahead, Raging Fyah stated "We are excited to be apart of this tour with such band as Tribal Seeds. They are one of the few California based reggae band that is all about roots music. We will get to introduce our vibes to a new audience. "